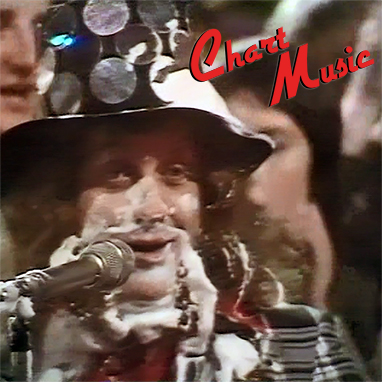 A moderately special episode of the podcast which asks: so what did Tony Orlando do to get banged up for three years, then?

This episode, Pop-Crazed Youngsters, is a massively-flared, clompy-heeled, zebra-printed celebration of one of the greatest traditions of any British Christmas Day: the opportunity to force the rest of your extended family to sit through an end-of year episode of The Pops and revel in the torrent of tutting coming out of your Nana’s mouth as she works their way through the Quality Street. Fourteen chart-toppers from The Most Seventies Year Ever are trotted out, from a time when the Number One single was either astoundingly brilliant or absolute cat shit.

Your hosts – Tony Blackburn and Noel Edmonds – really get into the Christmas spirit by shoving tree branches up each other’s arses and donning massive Lenny Kravitz-style scarves of tinsel as wave after wave of alternate Glam nirvana and easy-listening rubbishness floods the screen. On the downside, Donny Osmond spends Christmas alone, David Cassidy has a big sulk around Kew Gardens and we discover that Santa is actually an obnoxious American child with big teeth, but Dave Hill mutates into a Chicken Angel! Roy Wood plays a vacuum cleaner! Steve Priest radges up the grandparents of Britain in a sexy Nazi Bismark rig-out as Andy Scott whips out his third leg! And some dog-flouncing-off action!

David Stubbs and Taylor Parkes join Al Needham for a gleeful ripping-down of the gaudy paper chains of 1973, veering off to discuss Jody Scheckter Racing, the infinite superiority of the Beano Book over the Dandy annual, grandparental fantasies about Roy Wood being made to peel potatoes, Opportunity Knocks winners who were massive racists, what breaks Donny Osmond’s heart, a flick through the Music Star Annual 1974, being sang at by an entire factory when you’ve had an over-long shit, and so much more, with swearing.