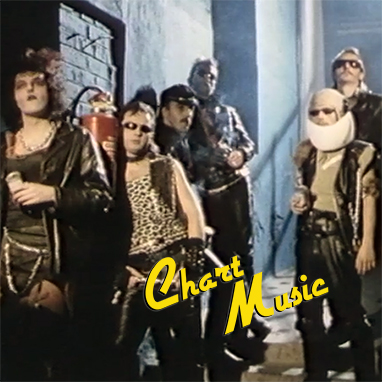 The latest episode of the podcast which asks: have you got crabs?

In this edition, Pop-Crazed Youngsters, we decided to give you the opportunity to watch our selected episode of Pops along with us (providing you keep a finger on the pause button, as we’re over five times longer). It’s just come out on BBC4, giving you an invaluable opportunity to tut to yourself and say; “God, they didn’t even mention that Richard Skinner keeps saying “It’s the way you tell them” to Simon Bates, the thick twats.”

Yes, we’re smack in the middle of the Eighties, and a mere nine days away from Live Aid – and no-one realises yet what a massive fault-line it’s going to create in Popland, when the dinosaurs come marching back and cram everything around them into their gaping maws. Least of all us, as we’re too busy skulking around in a post sixth-form haze, sitting through a Saturday detention due to Tipp-Ex-related obscenities, and pitching a Pants Tent to George Michael in Barry Island Butlins.

Musicwise, however, this episode veers all over the shop, from Pete Burns taking the last stand for Pop Weirdness to Tears For Fears poncing about in Montreux to Paul Weller in his Pants to Oompah Reggae to Mick Hucknall annoying people trying to play pool to Roland Gift singing like he’s got a hot bit of potato in his mouth to Ian Astbury dressing up like someone who reads palms in a caravan off Blackpool Pier. It’s actually better than expected, although the No.1 is depressingly rammel. And as luck would have it, one of us – who was a Hip Young Cockleslinger at the Barry and District Times – has pulled out his scrapbook and treats us to his original reviews.

Neil Kulkarni and Simon Price join Al Needham for a solid pick at the scab of 1985, veering off on the usual tangents, which include having to go to school with the Topless Lovelies, the correct procedures of cock-drawing, trying to dress like Paul Weller and ending up looking like Eric Morecombe, Quincy Punks, and the Treacherous Steph of Basingstoke. Naturally, swearing is deployed. Often.