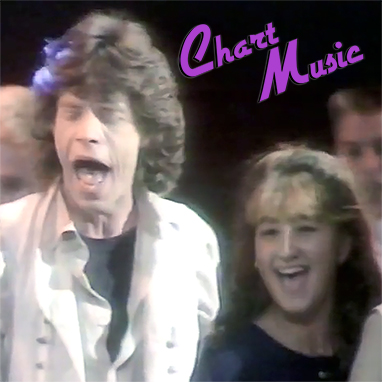 The latest episode of the podcast which asks: how bad would your war have to get before you start thinking of calling up Johnny Hates Jazz?

This episode, Pop-Crazed Youngsters, sees the Chart Music gang trapped on the wrong side of Eightiestown, surrounded by a faceless herd of blandos in shitty suits with the sleeves rolled up, goaded into action by a wizened Don mincing about on top of a balcony. Bottom line: this episode of TOTP is absolute cat shit.

Because it’s co-presented by Mike Smith, who refused to have anything to do with Top Of The Pops after he left the show, you can rest assured that The BBC Won’t Show This when they get round to 1987 on their repeat run. And you’re not missing much, to be honest. Fucking Madonna Again gets all butch on a moving walkway in Turin, ABC turn into one of those bands of the era who want to be ABC in 1982, Jan Hammer looks extremely pleased with his brand new keytar, Mick Jagger holds children to ransom in an attempt to get his rubbish new single into the Top 40, and what the fuck is Gary Numan doing here?

Al Needham is joined by Taylor Parkes and Sarah Bee for a wince-inducing gaze into the open wound of the late Eighties, veering off on tangents including the CM verdict on Sounds Like Friday Night, how the hair gel of the era made it feel that you had a crusty tissue on your head, being forced to listen to Shakin’ Stevens on the school bus every day, discovering your def new high-tops are actually Bay City Rollers trainers, and more information on selling dirty knickers than anyone really needs. A colossal amount of swearing in this episode. Obviously.

The dozenth episode of the podcast which asks: were Senser any good at Laser Quest?

This episode – another pop-blather behemoth – sees us stepping right out of our comfort zone and looking at an episode from the mid-Nineties. A golden era when, as we all know, the charts were weighed down with young men with guitars and Paddington coats that made us all proud to be British again.

The episode we examine, however, sees The Greatest Pop TV Show Ever at the beginning of its death throes as it begins its run of celeb presenters with Tetley Tea Folk-soundalike Mark Owen and Robbie Williams, who is already starting to get on all right-thinking peoples’ tits with his endless mugging. The charts – our precious, beautiful, immaculate charts! – are treated with the utmost distain while we’re constantly reminded of an exclusive premiere of a Madonna video, which is an advert for a film we’ve never heard of.

Yes, Blur are on at the beginning, but that’s your Britlot. What follows is a parade of people we thought we’d safely left behind in the Eighties, loads of Euro-acts both good and bad, Alison Moyet being forced to submit to an unrelenting biff-boff beat and a No.1 that left us hankering for the days of Jive Bunny. On the upside, Roachford manages to get through a song without shitting himself (allegedly).

Luckily, Al Needham is joined by Neil Kulkarni and Simon Price – who both worked for Melody Maker at the time, and take the opportunity to offer invaluable advice for anyone looking to break into the music press a quarter of a century ago and trade war stories about riding bikes on a dancefloor with the Sugarcubes, finding a message on their answering machine from lead singers threatening to break their legs, apologising for being gingist in the past, and having a potential fight being broken up by Carter the Unstoppable Sex Machine.

The seventh episode of the podcast which asks: if Les Dennis and Dustin Gee were Torvill and Dean, who would be who?

This episode sees us firmly on the wrong half of the Eighties, with Live Aid a mere five-and-a-bit weeks behind us, and the Greatest Pop Programme Ever is not coping very well with it. At all. For starters, it’s been shunted up to 7.55pm to make way for Eastenders, The Kids are burdened with pom-poms and manky pastels and pushed right to the back of the studio and danced at by Pineapple Studio Wankers, there’s a compulsion to lob in as many videos as possible, Garry Davies is wearing an appalling jacardigan, and there’s Steve Wright.

As for the actual music, Lisa Lisa is with Cult Jam (but without Full Force), Drive by The Cars is trotted out for the second year running, Kate Bush rises about it all as usual, Stock Aitken and Waterman make a record that actually manages not to get on your wick. and oh look, there’s Madonna with her pits over the hand dryer. And there’s a woman cupping a right handful of a gorilla’s breasts.

Al Needham is joined by Taylor Parkes and Neil Kulkarni for an unflinching gaze into the open wound of post-Live Aid Pop, breaking off to discuss failed Marxist dictatorships in Ethiopia, failed attempts at breakdancing, Psychobilly caravan holidays in Skegness, persistently homosexual Mexicans, the Curse of Arsewasher’s Back, and white boys from villages going to black hair salons in order to look like a wrestler. And swearing.

The second edition of the podcast which asks: who would win in a massive cage fight amongst Radio 1 DJs of the 70s and 80s?

This episode, we enter the late winter of George Orwell’s visionary magnum opus – but not even in his worst nightmares would he have imagined the Ministry of Pop Telly trying (and failing) to throw the No.1 single down the memory hole. And a Top 40 with two Thompson Twins entries.

Thankfully, we’re spared both of them, but what we actually get is cow-heavy and laden with the musk of the lower reaches of the charts, heavily influenced by the Channel Fourification of pop music, and overseen by Dave Lee Travis and his YTS lad Gary Davies. The Smiths make their second appearance, Nik Kershaw models the 2048 Little Chef uniform, Madness give up doing the Bummer Conga and go all serious, and we’re shocked to learn that Madonna isn’t black. And Marillion see fit to bring eight synths into the studio when there’s really no need.

Al Needham is joined by David Stubbs and Taylor Parkes for a serious pick amongst the brightly-coloured rags of the mid-Eighties, checking for stains along the way. Sorry for the delay on this: there’s been technical mither we need not go into.

Follow us on Facebook here. We’re not arsed about doing Twitter. Life’s too short to argue with someone you don’t know, sitting there in their pants.