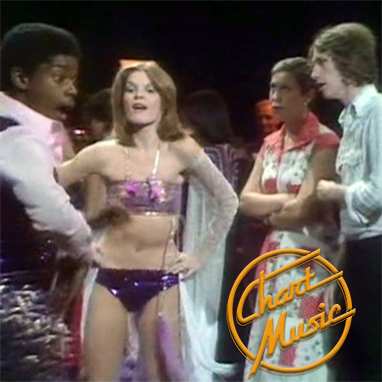 The latest episode of the podcast which asks: can you remember a wazz you had 43 years ago?

This episode, Pop-Crazed Youngsters, is the beginning of a five-part mini-series where members of Team Chart Music run a finger along our TOTP collection and select one of their favourites – and Our David has kicked it off by pulling out an absolute plum from the very end of the Drought. Your panel were killing time during the summer holidays sitting in hot cars, playing Shove Matchbox, or trying to be the Lord Killinan of the ladybirds, but over in the BBC TV Centre, Noel Edmonds has graciously taken time out from getting ready for Swap Shop (and presumably counting the excrement passing through the piping system) to deluge us all with another massive dollop of brightly-coloured Pop gunge.

Musicwise, it’s a mainly above-par serving of the usual mid-70s melange: Manfred Mann turn up the knob on their synth. The Bee Gees lob a glitterball through the window of the charts. Robin Sarstedt – the Lothario of the Tea Dance – pitches up one more time. The Stylistics stand in a park on Dress-Down Friday. Gallagher and Lyle do something. The Chi-Lites are accompanied by a non-racist cartoon. OH MY GOD IS THAT CAN. And most importantly, we finally get round to Ruby Flipper, the dance troupe that actually featured men and – gasp! non-white people.

David Stubbs and Taylor Parkes join Al Needham for a lick of the Lolly Gobble Choc Bomb of ’76, veering off on such tangents as belt shops in East London, mid-70s sexual health clinic procedures, Ian Hitler, the Brum Burger, Godzilla and Social Exclusion, and one of Chart Music being a retired male stripper. NOW WITH ADDED SEXUAL SWEAR WORDS WARNING!